Rajasthan is the India’s largest state by area.

♦Rajasthan is located on the western side.

♦The Rajasthan state was formed on 30 March 1949 when “Rajputana” the name adopted by the British Raj for its dependencies in the region was merged into the Dominion of India.

♦Rajasthan’ Capital and Largest city is Jaipur which is also known as Pink City, located on the state’s eastern side.

♦Other Important cities are Jodhpur, Udaipur, Bikaner, Kota and Ajmer.

Jaipur is the Capital and the Largest city of Rajasthan. It was founded on 18 November, 1726 by Maharaja Jai Singh II. He was the ruler of Amer. Jaipur is Famously known as the Pink City of India.

Amer fort is located on hill. It is the most popular attraction in Jaipur. Amer Fort is known for its artistic Hindu style elements. Amer Fort is popularly known as Amer Palace. The fort was the residence of the Rajput Maharajas and Families. This Palace was built by Raja Man Singh during 967 CE.

Hawa Mahal is a palace in Jaipur. This palace is called by Hawa Mahal because it was essentially a high screen wall built so the women of the royal household could observe street festivals while unseen from the outside.  It was built in 1799 by Maharaj Sawai Pratap Singh. The original intention of the lattice was to allow royal ladies to observe everyday life in the street below without being seen, since they had to obey strict “purdah” (face cover).

Birla Temple is Hindu Temple located in Jaipur. It is a part of several Birla Temples in Country. This temple forms one of the most beautiful attractions of Jaipur.  The construction of the temple started in 1977 and it went on till 1985. On 22nd February 1985. The Temple is dedicated to Lord Vishnu (Narayan). Birla Temple is also known as Laxmi Narayan Temple.

Udaipur is populary known as city of Lakes.  It is the historic capital of the kingdom of  Mewar. It was founded in 1553 by Maharana Udai Singh . daipur is a very popular tourist destination, and known for its history, culture, scenic locations and the Rajput-era palaces.

City Palace of Udaipur was built over 400 years with the contribution of several rulers of Mewar dynasty. The construction was started in 1553 and end in 16th century. The City Palace in Udaipur was built in a flamboyant style and is considered the largest of its type in Rajasthan.

Lake palace was formerly known as Jag Niwas Palace. Lake Palace is now a Luxury Hotel. The Lake Palace is Situated on Island Jag Niwas. The hotel operates a speed boat which transports guests to the hotel from a jetty at the City Palace. The Lake Palace was built between 1743 and 1746under the direction of the Maharana Jagat Singh II as winter palace.

Bada Bagh is also called as Barabagh. It contains a set of royal cenotaphs or chhatris of Maharajas of jaiselmer state.

Salim Singh ki haveli has been built on the remains of an older haveli built in the late 17th century. The new building was built in the year 1815 and was occupied by the Mehta family of Jaisalmer. They were the most influential family of their time. This haveli was commissioned by Salim Singh. The haveli has a distinct architecture.

Jaisalmer Fort is one of the largest fully preserved fortified cities in the world. It is situated in the city of Jaisalmer. It is a world heritage site. It was built in 1156 AD. The Fort stands admidst the sandy expanse of the great Thar Desert on Trikuta Hill.

Sam Sand Dunes is a must visit in the state of Rajasthan in the environs of the city of Jaisalmer. It is likely that you are going for a Desert Safari when planning to visit Thar Desert.

The city of Bikaner was founded in 1488 by Rathore Rajput Ruler Rao Bika. Rao Bika was the son of the Rathore Ruler Rao Jodha who founded Jodhpur. The place is known for its forts and food.

Junagarh is a fort in Bikaner city. The fort was originally called Chintamani and was renamed Junagarh or “Old Fort” in the early 20th century. It is one of the few major forts in Rajasthan which is not built on a hilltop. It was built by Karan Chand under Raja Rai Singh of Bikaner.

Pushkar is a town in the Ajmer district of Rajasthan. Pushkar is one of the oldest existing cities of India. It lies on the shore of Pushkar Lake. The date of its actual origin is not known, but legend associates Brahma with its creation. Pushkar is also famous for its annual fair Pushkar Camel Fair held in October to November for a period of seven days .

Brahma Temple is Temple  dedicated to the Lord that brought about the creation of everything, Brahma. It also features worship to one of his ladies, Gayatri, and the worship is supervised and regulated by ascetic saints.

Mount Abu is a popular hill station of Rajasthan. It is referred to as ‘an oasis in the desert’ as its heights are home to rivers, lakes, waterfalls and evergreen forests. Achalaeshwar Mahadev Temple is Dedicated to Lord Shiva. The temple is believed to have been constructed sometime in the 9th century AD.  According to local legend, the temple is built around a toe print of Shiva. Shiva is worshipped, like at most Shiva temples, in the form of a Shiva linga, a phallus shaped structure representing Shiva and the power of creation. The shiva linga at this temple is a naturally occurring stone structure.

Ajmer is surrounded by Aravalli ranges and is a city seeped in both history and culture. It lies near Pushkar, a major Hindu pilgrimage site and is the home of the shrine of Khwaja Moinuddin Chishti. This makes it a unique pilgrimage site for both Hindus and Muslims. Apart from being a pilgrimage site, it is also the home of many fascinating historic sites and therefore welcomes tourists from all over the world. In 2015, Ajmer was selected as a heritage site for the HRIDAY – Heritage City Development and Augmentation Yojana scheme of Government of India. 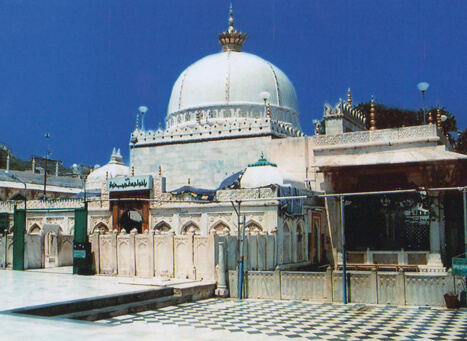 #AKBARI FORT & MUSEUM
Akbari Fort & Museum is a museum In Ajmer. It was once the residence of Prince Salīm, the son of the Emperor Akbar, and presently houses a collection of Mughal and Rajput armour and sculpture. Construction of this had been commissioned by Akbar in 1570. This is the location from where Salim, as the Emperor Jahangir read out the farman permitting the British East India Company to trade with India.
CULTURE

Rajasthan has artistic and cultural traditions which reflect the ancient Indian way of life. There is a rich and varied folk culture from villages which is often depicted as symbolic of the state.

Highly cultivated classical music and dance with its own distinct style is part of the cultural tradition of Rajasthan.

Rajasthan is famous for textiles, semi-precious stones and handicrafts, and for its traditional and colorful art.

This state is home to one of the largest and ancient mountain ranges, the Aravali Range. The most revered and renowned Dilawara Temples are situated at Mount Abu, a part of the Aravali range. Not only is Rajasthan the largest state in India, its capital, Jaipur is the main city in India.Kalibanga, near the Ghaggar River in the state is an archeological hotspot due to the remains of the most famous ancient civilization; the remains Indus Valley Civilization can be locatedhere.

Irrfan Khan is an Indian film actor, known for his work predominantly in Hindi cinema, as well as his works in British films and Hollywood.

Sakshi Tanwar is an Indian actress and television presenter. She is known for her work in the television soaps Kahaani Ghar Ghar Kii, Bade Achhe Lagte Hain. In 2016 she starred in Aamir Khan starrer Dangal.

Lakshmi Niwas Mittal is an Indian steel magnate, based in the United Kingdom. He is the chairman and CEO of ArcelorMittal, the world’s largest steelmaking company. Mittal owns 38% of ArcelorMittal and holds an 11% stake in Queens Park Rangers F.C..